It was the classic of the classics of adventure racing in Québec on last May 18th. Raid Pulse is a race that has figured on our calendar for years as it is a bold, very challenging and rewarding AR event. Annick and Thierry have been organizing their races with passion for more than 10 years and it is definitely one of our favorite race. For a second year the race was hosted at Base de plein air Air Eau Bois. This area has endless possibilities with the majestic Lac du Poisson Blanc and it's easy to imagine races up to 48h going on over there. 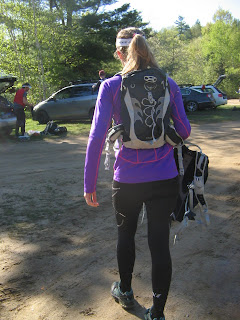 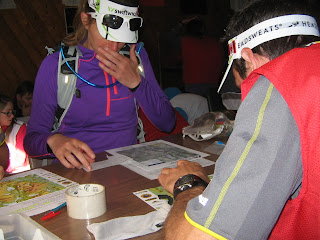 We had decided to race Raid Pulse with two different teams. Nath and JY as a coed duo for Camp de Base and myself as a solo Icebreaker TouchLab Mtl. We had agreed to more or less race together and pool our resources navigation wise but I would not physically help in any way to keep things fair for everyone.

The day was beautiful and sunny, which would later make up for the announced swim... 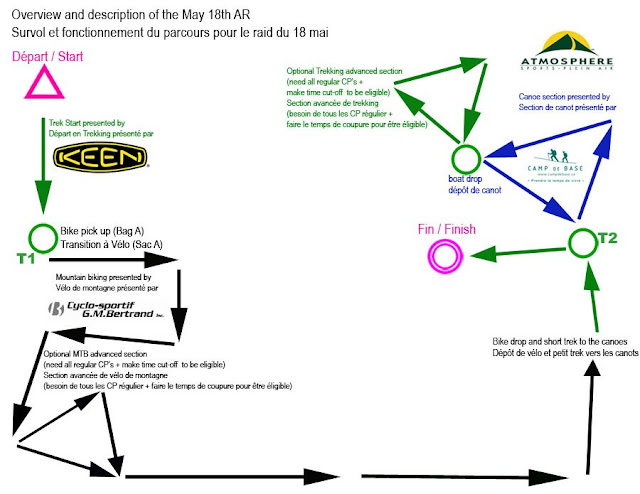 The race started at 10:10 am with a trek for 4 CPs. As it seems I have a tendency for it... we again started quite fast on the run... only to soon realize we had passed our junction point for CP1 shortly later. We bushwacked our way uphill and got to CP1. The rest of the trek proved to be more tricky than anticipated for us... CP2 went relatively well downhill and then we went for a freakin' cold but thank God short swim to CP3 as it was located on a small island and it was the shortest way... At that point there were many teams around, which is always tricky to deal with... at least for me. After again taking unnecessary detour to CP4... we arrived at TA1 a fair amount of time behind the leaders and unhappy about it, but also knowing we still had time to make up for our mistakes. 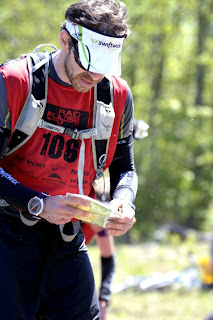 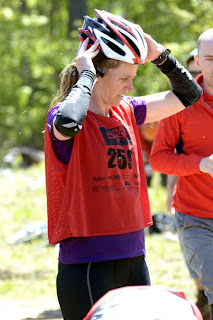 After a quick TA we hopped on to our bikes on the way to Mont Sainte-Marie mountain bike trails system. First we had to negotiate the dirt road on the way. It went well as we caught a few teams up the road. It felt good to be on the bike and finally feel we were moving with speed... especially on the awesome long descent!

At CP5 we met with volunteers extraordinaire Tanya and Ray who had designed a fun and technical course in Mt-Ste-Marie trails. We took the extra coordinates for 2 advanced CPs and off we went. The trails were beautiful, quite rolling and dry. A good pace and execution got us out of the loop and back on the dirt road in good time, making our way up in the ranking. 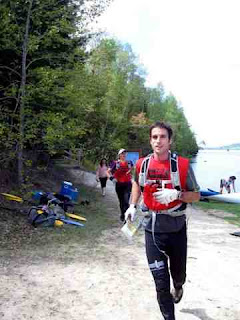 After some times on chemin de la montée à Jean Marc, we had to shift to a trail at CP8. It was an old bike/ATV trail was really rough, with a lot of trees that made it hard to handle the bike straight. We gritted our teeth for that last part of riding and push biking with very rough trail conditions... (but isn't it what we signed up for ?) The key with rough race terrain is always to just not stop and keep moving and to remind ourselves that conditions are equal for all teams... Given the circumstances we were doing good... until... oups... flat tire. Up to that point I had not really minded the bugs... but when you have to stop and stand still for a few minutes they happily remind you of their presence... we managed to get over this bump quickly and resumed onto the trail and soon got to the bike drop. CP10 and CP11 were then to be collected 'coasteering' on the side of the lake... but we managed to stay dry and then ran down to the last TA happy to finally get a leg break and to jump into the boats. We were also very happy to take an extra second to refuel ! At that point the volunteers told us we ere in 5th and 6th place... which meant everything is still possible given our paddling skills. 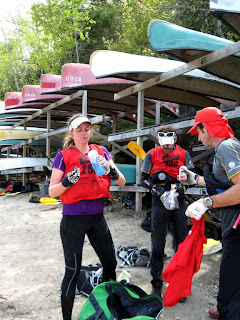 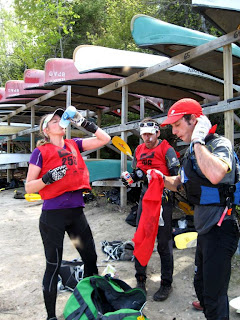 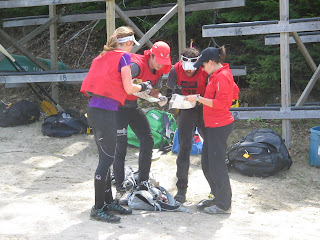 The paddling at Air Eau Bois is what makes this place so special. The Lac du Poisson Blanc offers fantastic views and endless navigation possibilities. There were 2 mandatory and 4 advanced CPs on this last section. the Mandatory had to be collected in numerical order, but the advanced could be taken in any possible way. This what adventure racing is all about, route choices. After mapping the 4 ACPs on our maps, we went on in our boats and soon collected the 2 mandatory CPs (12-13). 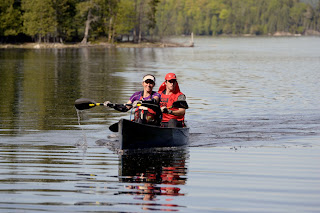 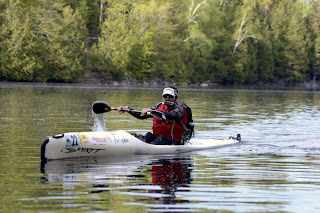 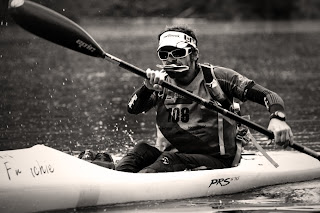 With enough time remainning on the clock we then attacked the advanced section by heading north to an island, but instead of going around where the CP was, we managed to short cut the boat ride significantly and add just a 50m bushwack. The operation was successful as we passed two teams in the process. We then resumed paddling south west toward the other ACPs with a similar strategy, getting as close as possible on water without any detour, and then bushwacking in/out. 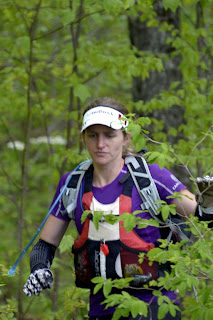 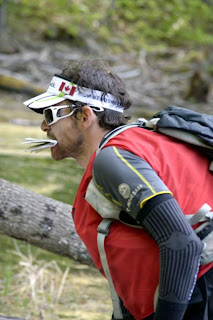 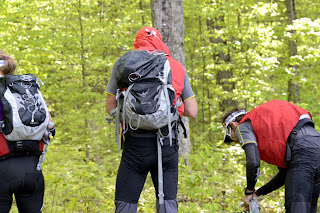 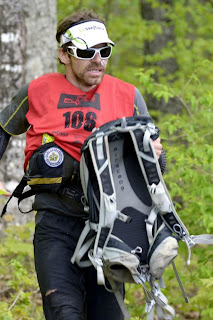 After collecting all CPs, it was time for me to take advantage of the PRS surf ski a bit so I left my comrades and paddled alone until the beach for the last short trek uphill to the finish line. Nath and JY arrived only  1 minute later. 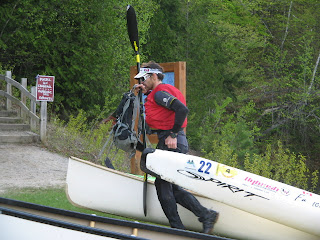 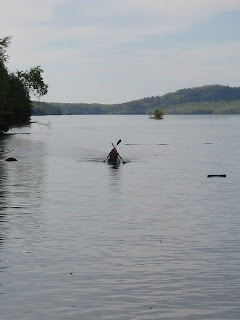 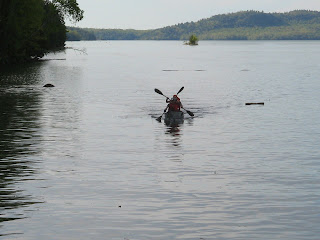 We were surprised to be congratulated as winner of our respective category, and to be 2nd and 3rd overall ! Not a bad race after all ! 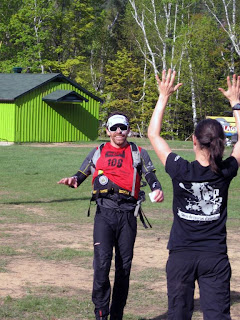 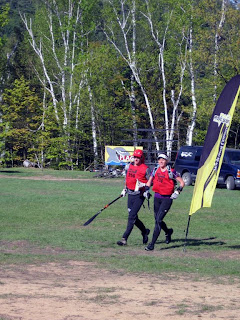 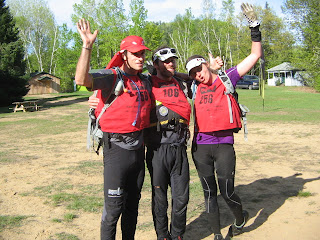 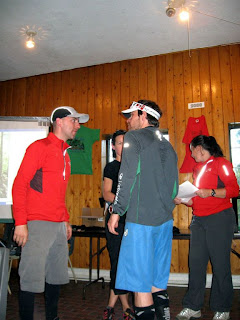 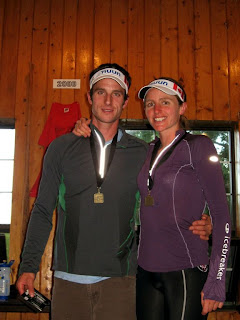 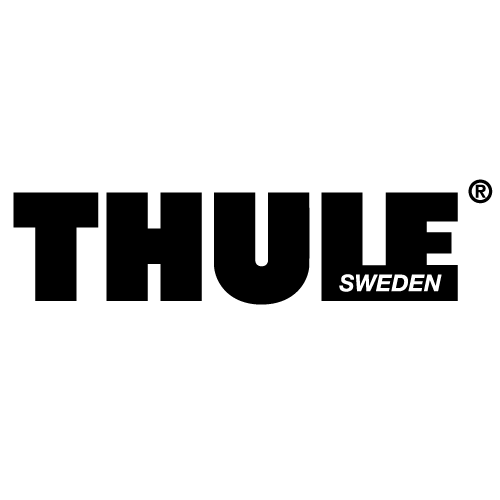 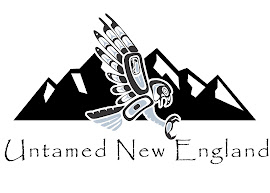